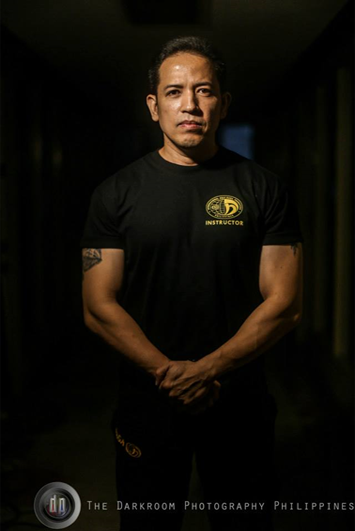 De Jesus holds an Expert Level 3, the first and the highest Krav Maga Practitioner in the South East and East Asia. He had the privilege of training and earning his Expert Level 3 in Israel after successfully passing the exam and meeting the criteria given by the Chairman and Head Instructor of the IKMF, Master Avi Moyal. Expert Camp, 14-19 May 2019.

Trained and completed the Expert Camp under Master Avi Moyal and the IKMF Global Instructor Team, Caesarea, Israel, 19-24 May 2014.

Trained and completed the Expert Camp under Master Avi Moyal and the IKMF Global Instructor Team, Caesarea, Israel, 17-22 May 2016.

Trained completed and passed the Tactical Shooting Instructor Course under Israel Cohen, Expert 3 and Head of the S.W.A.T. & Military Division of the IKMF. Sept. 8 to 15, 2016 in the Philippines.

Trained and completed Kids Instructor Course (KIC) under Shlomi Moyal Expert 3 and Head of Women & Kids Division of the IKMF. Sept. 25 to 30, 2017 in Hong Kong.

Trained and completed the Expert Camp under Master Avi Moyal and the IKMF Global Instructor Team, Caesarea, Israel, 14-19 May 2019.

After one and a half years of training in Krav Maga, De Jesus took the Civilian Instructor’s Course (CIC) held in the Philippines in 2009. CIC, a fundamental course for certification as a Krav Maga self-defense instructor, involves over 180 hours of study and training.

From Practitioner Level 2, de Jesus received a Graduate Level 2 certification under the IKMF. This made him one of the first Filipino Krav Maga instructors in the country.

Asked why he wanted to become a full-time instructor, De Jesus said, “Because I believe in the efficiency and effectiveness of this system (Krav Maga).” Immediately after the CIC, De Jesus began training civilians and law enforcement units according to the principles of combat expressed in IKMF. During the Instructor Update in 2010, he achieved a Graduate Level 3 certification and subsequently achieved his Graduate Level 4 two years later after successfully passing the exam administered by Master Avi Moyal. In December 2012, Israel Tamir certified him as a Graduate Level 5 upon completing the requirements set by the IKMF.

22 May 2016, he earned his Expert Level 2 Certification from Master Avi Moyal, Tamir Gilad (Expert 5, Head of Testing Committee GIT) and Israel Cohen (Expert 3, Head of SWAT and Military GIT) at Ceasarea, Israel, he is the highest ranking Krav Maga Instructor/ Practitioner in Far East Asia since 2009.

19 May 2019, he earned his Expert Level 3 Certification from Master Avi Moyal, Israel Cohen (Expert 4, Head of SAWT and Military Division GIT) and Marcus Torgerson (Expert 3, GIT) at Ceasarea, Israel, he is the highest ranking Krav Maga Instructor/ Practitioner in Far East Asia since 2009.

His task as the IKMF Regional Director of Asia is to oversee the operation of all the IKMF chapters in the region, train the Instructors and Directors, and conduct seminars that will introduce IKMF Krav Maga to new practitioners.

– Trained and tested the Country Director of IKMF Korea for his Graduate Level 2, as well as conducted a seminar for IKMF Korea, 6-12 July 2014.

– Trained and tested the Country Director and other instructors of IKMF Singapore, 28 February-2 March 2015.

– Trained and tested the Country Director of IKMF South Korea for his Graduate Level 3, 22-24 July 2015.

– Trained the Mongolian Police, Marshalls and Security under the IKMF Mongolia, 22-29 July 2015.

In addition to his responsibilities as Regional Director of Asia, the IKMF has recently also put him in charge of the region of Africa.

De Jesus attended and facilitated various seminars in his efforts to spread the discipline of IKMF Krav Maga among Filipinos and the general public.

De Jesus is the Brand Ambassador of 5.11 Tactical Philippines and Beretta APX Pistol.

De Jesus is also a kettlebell instructor, certified in 2010 by Steve Cotter of the International Kettlebell Fitness Federation.